Warning: Do not drive any licensed motor vehicle registered in a name you believe the police would be interested in on Mass Ave NW E of 9th st, or on NY Ave NW in the same area due to these cameras. They appear to be used to “geofence” areas within a few blocks of the US Capitol, there are probably more of them in areas near the White House. Avoid these areas when driving due to a past history of harassment of activist cars flagged by the devices like those shown below:

Below are images of older automatic license plate reading cameras on New York Ave. The identical cameras “protecting” the I-395 ramp that passes under the US Capitol have been responsible for activsts in cars being pulled over by police and harassed after no traffic offense was committed or even mentioned by the cops. 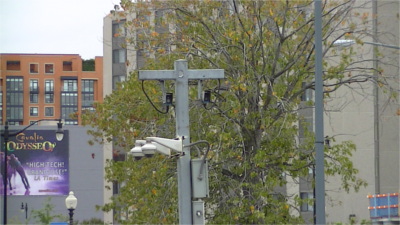 Zoomed in side shot of DC license plate reading cameras

Two license plate readers are at the top of this pole, two more are further down. This is the I-395 tunnel from NY Ave facing south.

Here is an image of what are probably infra-red license plate readers attached to the strobe light of a speed camera in the northbound tunnel exit from I-395, photographed while DC Ferguson protesters were occupying that area:

I do not know if all fixed license plate cameras in DC look like these, but it is a safe bet many of them do. The mobile units on the trunks of some police cars are a similar size and optical configuration. The standalone license plate readers are much smaller than speed and red-light cameras, as you can see by comparison to their support poles. It is likely that different models are purchased each time more are added, from contractor’s current stocks.

It appears that the NY Ave and I-395 cameras are an example of what the ACLU calls “geofencing” with license plate cameras. In this case the enclosed area is limited to a road that passes under the US Capitol. Attempts to geofence (surround with license plate readers) surface level urban areas are ineffective as must such places are best approached without using a car. Facial recognition cameras are an attempt to work around that, but that technology is difficult to make work with pictures from random angles in random light. In addition, dark sunglasses severely hobble most facial recognition software.