Posted on June 3, 2019 by dcdirectactionnews

On the first of June, Code Pink showed up outside the Lush Cosmetics stores on M st in Georgetown around the corner from the Embassy of Venezuala. They were there to demand that Lush shut down their two stores in Saudi Arabia, where women are tortured and imprisoned for protesting male guardianship laws and other misogynist Saudi oppression.These laws have been called gender apartheid.

Lush has already withdrawn from Israel in response to the BDS (Boycott Divestment Sanctions) campaign against that country’s aparthied laws targetting Palestinians. Israel is of course by no means the only human rights violator in the Middle East, and Code Pink is well aware of that. Saudi Arabia is one of the last absolute monarchies on Earth as well as quite possibly the worst country on Earth to be born a woman in. Saudi Arabia is infamous for their “male guardianship” requirement against women, which forbid women from making any important decisions (other than fleeing the country over the objection of the government) with the consent of a male relative. Code Pink said at the protest that there is “Nothing Lush about torturing women” who object to these policies.

Code Pink pointed out that Lush’s “bath bombs” are not exactly the kind of bombs Saudi Arabia and their stooges are dropping on Yemen, which due to Saudi intervention in their civil war is now being called the worst humanitarian crisis on the entire planet.

After the protest at Lush, Code Pink protested a second time at the nearly and entirely unmarked building housing the Saudi military attache’s office. This is on 30th street within sight of the Venezualan Embassy in which Code Pink withstood a 37 day siege while defending the building against the US backed supporters of three time failed coup plotter Juan Guaido. Yes, Code Pink paid a quick visit to what now may be the only embassy in DC that cannot issue passports or visas, or indeed any document that would be recognized at their own country’s border.

Getting Lush to abandon Saudi Arabia might not seem to be a direct threat to the Saudi monarchy, but BDS campaigns against Saudi Arabia start racking up wins, the oil companies could well face pressure to stop buying Saudi oil. It was BDS that played a major role in forcing an end to racial apartheid in South Africa, and the government of Israel treats BDS as a serious threat to their policies and rule. Saudi Arabia had better listen too: If this gets going, oil companies may have to boycott Saudi oil or risk women drivers boycotting their gas stations. Saudi Arabia would have to drop their male guardianship laws or watch their whole economy dry up and blow away. 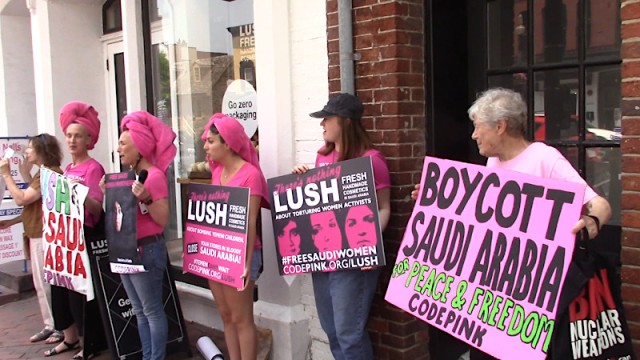