Posted on June 1, 2019 by dcdirectactionnews

Amid the news of Trump’s deadly racism on the border and the growing chorus of calls for impeachment over obstruction of justice, a new issue has arisen. When Trump visited Japan, someone ensured the US Navy’s USS John McCain was kept out of sight as it is named for one of his political enemies. This is the behavior of a stereotypical tin-pot dictator. On the last day of May, protesters showed up with a mock version of the destroyer in front of the White House hoping to torpedo Trump’s reputation. During this a 100 year old WWII veteran stopped by the protest.

John McCain’s politics were a mixed bag, ranging from jingoistic songs about bombing Iraq at one point to refusing to vote for “Trumpcare” when summoned from his hospital bed for the vote back in 2017. Trump considered him an enemy and went so far as to mock his capture and time as a POW during the Vietnam War. Trump sat that one out, citing “bone spurs” to hold off the draft. Trump did not RESIST the draft as a princicpled opponent of the Vietnam War, instead he just took steps to make sure it did not apply to him personally. He did nothing to help others shut down Selective Service, and nothing to stop the war in Vietnam. He has been called a “Chickenhawk First Class” as well as the sort of cheap despot who seeks to lock up his electoral opponents and from whom ships named for his enemies must be concealed even by the US Navy. 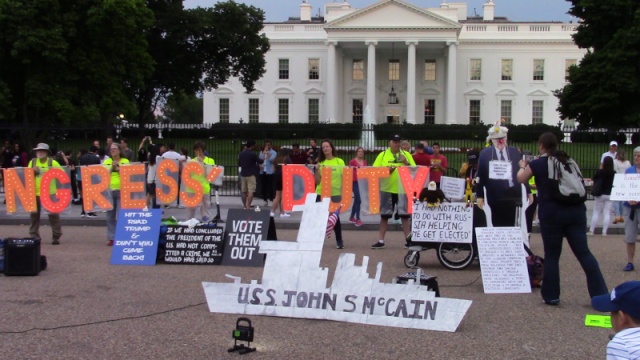 This is not exactly a red MAGA hat. Photo from an Amazon.com posting listing these as “out of stock”