Posted on May 12, 2019 by dcdirectactionnews

On the 11th of May, activists held a rally at the Embassy of Venezuala to respond to the now-confirmed water cutoff as well as the power cutoff. Things again got nasty as police threw down an activist for trying to deliver food to the beseiged embassy. This is at least the second time police have met food with violence at this embassy

On the 8th of May power was cut and initially false reports said water was cut off as well. By the 10th of May the water had been cut off for real, in an ugly development. At least there is no technical provision to block use of the sewers.

On May 11th, supporters of Juan Guaido and his fizzled coup attempt again were again present in force seeking to maintain their weeks-long siege of the embassy. Inside Code Pink, Popular Resistance, and Party for Socialism and Liberation (The Embassy Protection Collective) continue their work as caretakers of Venezuala’s embassy for the elected government of Maduro(elected successor to Hugo Chavez). Again large numbers of progressive activists were counterprotesting the coup supporters, again there were efforts to deliver food, and again this was met with force and violence. Unlike the 3AM May 8 situation, this time around police provided the outright violence. We have the police and the fascists working hand in hand again. This is the same thing as described in the well-known “cops and the Klan work hand-in-hand” slogan.

Video of assault by police on activist 16 sec, cut from longer twitter clip by Morgan Artyukhina 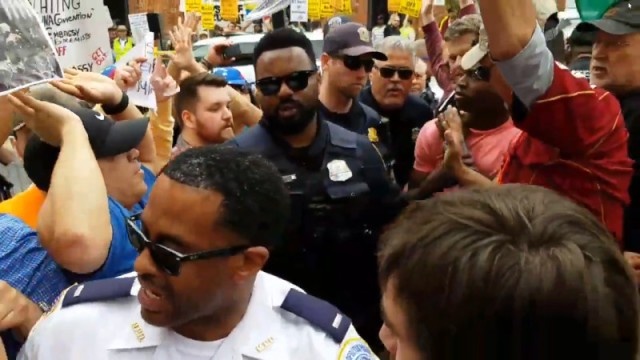