Posted on February 15, 2019 by dcdirectactionnews

Recently, BLM activists and No Justice No Pride got word that inmates at both the DC Jail (Central Detention Facitly) and the so-called “Correctional Treatment Facility” had used various excuses to deny inmates ALL outdoor recreation time for the past 8 months. In reponse, activists staged a pot-and-pan banging noise protest outside the jail on the evening of Valentine’s Day.

Late in the protest, one of the guards leaving the building towards the parking lot shoved a DC Indymedia videographer, then looked like he wanted to get physical when ordered to keep his hands to himself. With so many cameras rolling, he thought better of doubling down with a second offense of assault and kept walking. There is the possiblity that the guards wanted a deliberate provocation short of anything that would prove on video that they started whatever happened afterwards. Nothing did, as nobody was accepting bait held forth by jail guards who routinely use such tactics on the inside. On the other hand, any arrests would have risked TV news interest in the story, and by definition required literally bringing the protesters inside the jail to continue their work there.

For the past 8 months, th DC Jail and the privately-owned “Correctional Treatment Facility” have trotted out a range of excuses, mostly weather-related, for keeping all inmates inside 24-7. Unfortunately for them, no matter how unusual climate change made DC’s weather in 2018, it did NOT rain or snow every day! Now those on the inside have gotten word of this human rights abuse to supporters on the outside, and if the DC Jail and CTF do not cease and desist this human rights violation, if they do not restore outside rec time they can expect to have more hassles with protesters. They also have been put on notice that inmates know they have support on the outside for dealing with this issue, as the raucous noise of beating pots and pans was probably audible throughout the facility. 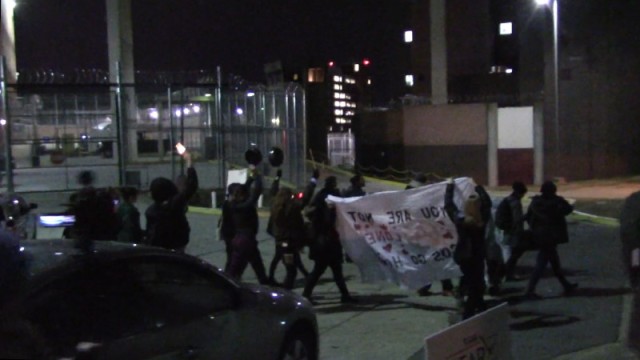