Posted on August 28, 2018 by dcdirectactionnews

Video- Band leads audience in chant of “Lock him up!”

Update Day 49, Sep 2:White House security lights come on during the protest, everyone pushed back

Monday, the 27th of August marked the beginning of the 7th week of nightly protests in front of the White House demanding Trump be impeached for the Russiagate scandal. The “Kremlin Annex” protests began on the evening of July 16 after Trump’s joint press conference with Vladimar Putin denying Russian interference in the 2016 election. There are now reports of Trump avoiding the White House while these protests are in session.

Due to that, over the weekend some of the same protesters showed up at a golf course where Trump was scheduled to play. These protesters hold that for Donald Trump to solicit Russian interference in the 2016 election to put him in power is nothing less than treason against the very US government he now runs. If so, that gives new meaning to “high crimes in misdemeanors,” the basis in the US government’s constitution for impeachment.

During the 2016 election, Donald Trump called for the imprisonment of his rival Hillery Clinton, leading MAGAts in chants of “lock her up!” Now the shoe is on the other foot: Protesters are chanting “Lock him up” at Russiagate-inspired protests outside the White House. .

The prosecutorial shells of the special counsel have bracketed Trump and are landing closer and closer. His “ship of state” is in real trouble and may soon be sunk. Manafort has been convicted of felonies by a jury and Michael Cohen has directly implicated Trump as part of his guilty plea. 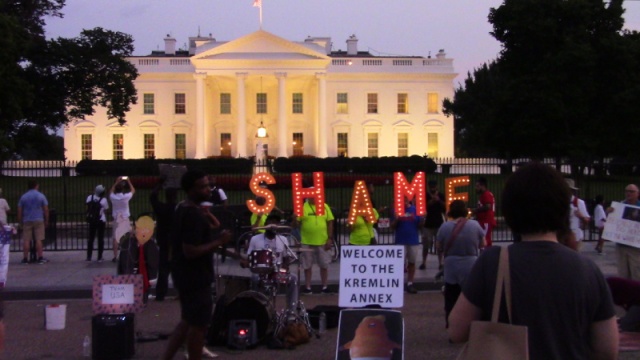 Sep 1: Protesters set up across from the golf club where Trump is hitting his Saturday bogeys(Photo by July Briskman)

September 2: Floodlights come on at the White House during the protest