Occupy Lafayette Park continues for 8th night in a row

Posted on July 24, 2018 by dcdirectactionnews

On the 23ed of July, impeachment protesters furious about the Trump/Putin summit and other issues staged the 8th evening in a row of noisy protests outside the White House. This time around featured a band including drums performing numbers calling on people to “dump trump,” and the keynote speaker was Congressman Steve Cohen. Rep Cohen denounced the lawless behavior of the Trump regime but seemed to think the pre-Trump global reputation of the US was much better than it actually was.

Even prior to Trump, the US had a reputation as a global warmonger, bully and resource hog, known among other things for interfering in elections held in other countries. Now the US finds itself on the receiving end of similar behavior from Russian autocrat Vladimar Putin, without whose help Trump would never have taken office. Many of the protesters at the White House have not previously participated in activism of any sort. Some seem to be folks who prior to Trump would have been random tourists if present in front of the White House, but now are furious about Trump behaving in ways that suggest he sees the US as a vassal state to Putin’s Russia. There have been tweets calling the White House the “Kremlin Annex,” showing it painted all red with the Soviet Union’s hammer and sickle, and similar such things.

The protests have also drawn rap and hip-hop performers, and more than a few speakers have mentioned Trump’s horrific separation of migrant families as grounds for impeachment. One sign at the July 23 protest called out Trump for genocide in Flint, Michigan and Puerto Rico. For any US “president” to simultaniously draw protest from “middle America” elements while also drawing an all-out anti-Fascist campaign from almost everything left of the Democratic Party indicates some seriously deep shit politically for the “president” in question.

Day 9: Trump supporter assaults elder, is detained by Secret Service. He was release when the victim refused to press charges. 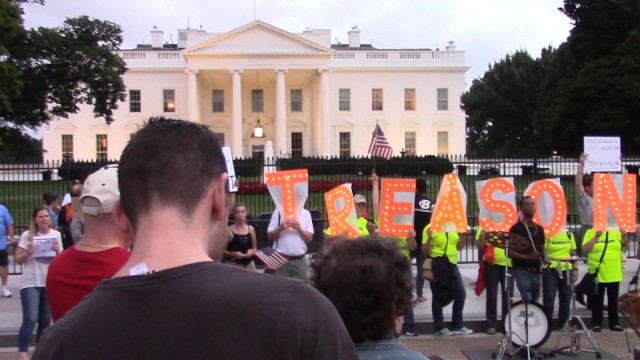