Posted on June 22, 2017 by dcdirectactionnews

Early morning on the 21st of June, a memorial for slain Muslim teenager Nabra Hassanen was burned in Dupont Circle. It has been placed the previous night during a “Justice for Nabra” vigil.

Nabra Hassanen was caught by a driver and beaten to death after the driver became enraged at a group of Muslim teenagers walking on the sidewalk. The others escaped his attack but news reports indicate she tripped on her clothing and went down, then was assaulted. Police deny that this attack was a hate crime or terrorism, claiming it was only road rage. Now, after detaining a 24 year old man from South Carolina for burning her memorial, they claim he was only illegally “tending a bonfire” rather than committing a terrorist act aimed at intimidating the Muslim community.

Had this been a memorial to a Trump supporter killed by anyone else, the person setting the fire would have almost certainly faced worse charges. In DC arson laws are limited to “structures” it seems, but he would probably have been charged with arson anyway. Maybe the charge would have been no-papered, but more likely he would have had to go to trial to get the charge thrown out-or plead guilty to lesser charges if the strain of years of court dates and attorney’s fees was too much.

DCist thumbnails of after and before photo 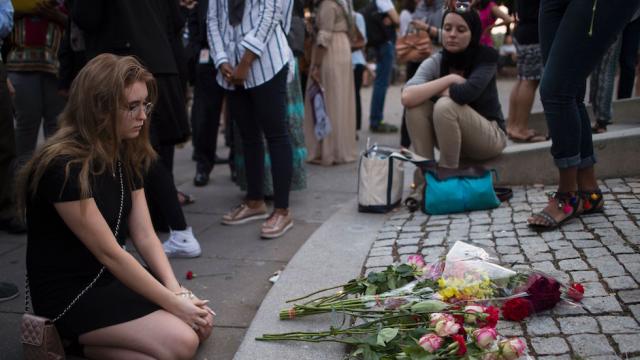 Photo by thehill.com of flowers laid in Dupont as the memorial began