Posted on March 24, 2017 by dcdirectactionnews

On the 24th of March, the DC Council held a public hearing on whether or not to confirm acting police chief Newsham. A “Mock Bloc” blocked 14th st outside after chalking warnings about Newsham’s domestic abuse history and related gender issues in front of the Wilson Building. Some protesters inside the hearing partially hog tied each other as a reminder of Newsham’s role in the 2002 Pershing Park mass arrests, and were eventually dragged out by cops saying they were being taken to trash cans.

While police were dragging activists out of the Council hearing, one male activist was told to either “get your woman under control” or “keep your girl under control” by one of the cops. This attitude is totally consistant with Newsham’s own history of trying to “keep his woman under control” with violence and physical abuse against his spouse. It is the kind of statement one would expect from a pimp and one the mainstream media would not admit can also be expected from a cop.

The “Mock Bloc” was dressed mostly in black to invoke the anticapitalist protesters mass arrested on Newsham’s watch on Jan 20, 2017. By focussing on a street blockade they also invoked the other major portion of DisruptJ20, the checkpoint blockades. The 14th st blockade was short-lived, as it was almost immediately attacked by a combination of aggressive motorists pushing through and equally aggressive bystanders on foot. As some of them grabbed at the chains in the barricade, another could be heard excitedly describing the scene into his cell phone, probably to the cops. With the bystanders getting rough, the Mock Bloc chose to withdraw rather than risk the situation escalating. Any kind of violence outside could have created problems for protesters inside the Council, and the cops were nasty enough there as things stood. Under orders not to arrest those they dragged from the hearing, they told protesters they were being dragged to trash cans.

Under Newsham’s style of policing, had the cops shown up, they might have decided to kettle the area and arrest both the protesters and the “bystanders” who had attacked them, leaving it to the courts to figure out who was who later. Police however were caught by surprise and were a no-show for the duration of the barricade, even though protesters less than an hour earlier had been in front of the Wilson Building itself.

Video of the “Mock Bloc” chalking at the Wilson Building, then barricading 14th st

Video of half-hog tied protesters dragged from DC Council and lame excuses from both cops and councilmember Phil Mendelson. video includes the “trash can” remark by police 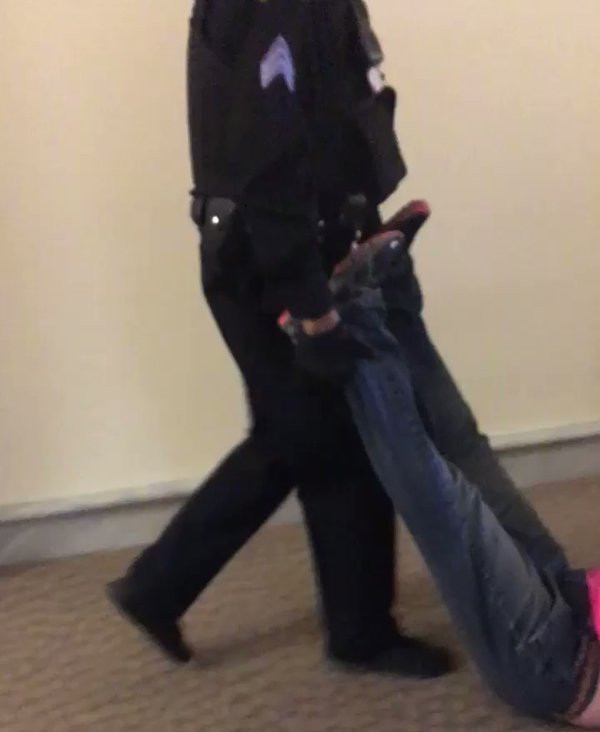 Police dragged activists out of the hearing, saying they were going “to the trash can”-photo by BlackLivesMatterDC

Earlier-chalking at the Wilson Building against Newsham