Posted on August 22, 2013 by dcdirectactionnews

On the 22nd of August, Wal-Mart’s lobbying office got an unpleasant surprise: Workers Wal-Mart thought they had thrown away were back, supported by current “associates.” After a short rally,they blocked the intersection of 8th and G sts NW. Then they returned they sat down and blocked the entrance.

Video of the sit-in 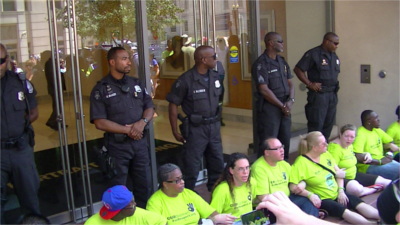 Our Wal-Mart is warning that if the 60 fired associates are not reinstated by Labor Day, Wal-Mart will face unspecified but even more aggressive action. I don’t know what their plans are, but they could do a LOT of damage if they want. If this takes the form of similar blockades at Wal-Mart stores at key times like Labor Day or Black Friday, it could cost management a lot of money! There are plenty of Wal-Marts located in small towns whose police departments have never seen any form of blockading device, much less something stout like a “Tootsie Roll” or a “Grizzly Bear.”