Hundreds strong Mayday march dukes it out with cops and Nazis, 4 reported arrests

Posted on May 2, 2013 by dcdirectactionnews

On May 1, 2013, activists at the Mayday parade intended to march from Malcolm X Park to Lafayette Park, with a surprise protest at the GAP and a Maypole ceremony at Lafayette Park. Cops and even Neo-Nazis had other ideas.

DC Direct Action News video:Fighting erupts at the GAP after undercover cop drops GUN, not as good but another angle on same events 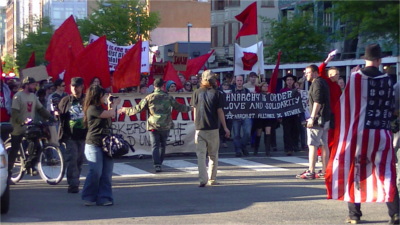 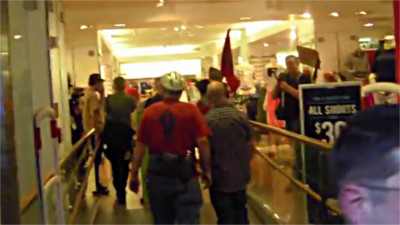 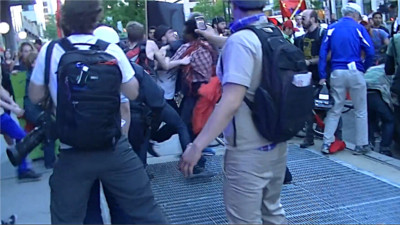 Early in the march, one or two cops in their cars acted like they were trying to start something with the marchers. One undercover in a gray sweashirt and dark shades was identified near the front of the march as it began. I have a photo, but have NOT published as I am not sure I got the same guy. It is on file under secure encryption. I do not know if this is the same guy that dropped his gun and holster together while trying to tackle someone at the GAP.

The first confrontation was touched off when cops arrested one person for unknown reasons when the march was on 14th st. The crowd swarmed back, and police were forced to abandon what appeared to be an attempt to arrest another person as protesters ringed them in. The cops did manage to escape with two prisoners according to the latest report, as the marchers didn’t stay put long enough to force the issue all the way to the end. Strangly, at one point I was told that ALL arrestees had been unarrested, but unfortunately that report was false.

After the 14th st confrontation, the march then continued, and it seemed the trouble was over. It was not. When marchers rushed into the GAP outlet on Connecticut Ave, the shit really hit the fan. Protesters were there because GAP labels were found in the infamous Tazareen factory fire in Bangladesh, where workers are fighting furiously to put an end to sweatshops and factory deaths. The GAP is a notorious seller of sweatshop goods. Until the uprisings trigged by the rash of factory fires and the recent factory collapse, multinationals were scrambling to switch from China to Bangladesh due to lower wages.

Now the big clothing retailers are cancelling orders from Bangladesh as huge protests there block shipping from harbors and strikes idle the sweatshops. Protesters in Bangladesh are demanding the execution of the owners of the factory that recently collapsed.

Police vigorously resisted protests at the GAP, and at one point appeared to try to seal several protesters inside. At least one person, maybe more, was arrested there. Suddenly, a person dressed as a protester tackled another protester-and a GUN and holster tumbled out of his clothing to the street. That person was an undercover cop, and their carelessness could have killed people.

With life and death potentially on the line, an incredibly furious street battle erupted instantly. I do not know if the cops managed to make any further arrests, but it was very clear they had to give some to get some, the fight appeared almost evenly matched or possibly a slight edge favoring the protesters.

I have not seen this kind of fighting over protesters entering a public building since IMF protesters stormed the Washington Circle Hotel back in Spring 2010, and even that was not as violent. Since then, protesters rushing the doors, occupying a lobby, then leaving after half an hour or so has been a common occurance in DC with little violence resulting-until now.

After an unknown but apparently low number of arrests, this battle burned itself out, and protesters again returned to the streets to finish the intended march. Only thing was, the “White Student Union” from Towson, including outright neo-Nazis, was also by the White House to counterprotest, sparking a third round of street fighting and intense wrestling over asphalt. At first it looked like the cops wanted to remove the Nazis from the area, but they quickly returned to their usual role of protecting the Nazis, the way they always do,

Despite more police attacks on Mayday marchers, and at least one more person assisted from the field by medics, the Nazis were slowly pushed farther back-and at least one Nazi flag ended up a trophy of war, with pieces of it tied to an activist’s bike.

There were 4 reported arrests at the Mayday parade. This could have been far worse, if the marchers had not supported their comrades fully.

I also saw at least two people helped away from the action by activist medics, and at least one person arrested was also injured.