March from Seattle for GLBTQ Equality arrives in DC

Posted on February 24, 2013 by dcdirectactionnews

On the 23ed of February, the Into the Light Walk for GLBTQ total equality arrived in DC, after a 6,000 mile march that began in Seattle and wound it’s way across the continent.

Video Highlights of the arrival of the Into the Light Walk 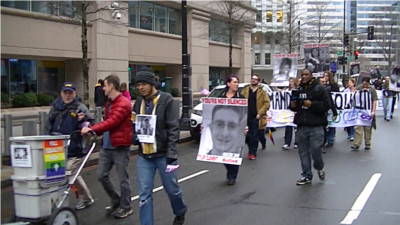 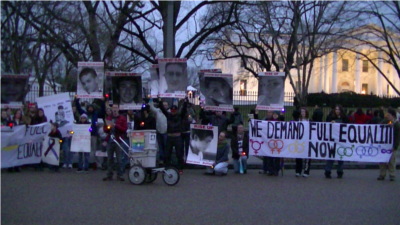 As the march progressed across Turtle Island, participants dropped in and out as they needed, yet the march always kept going-and it’s founder walked the entire distance on foot. Many marchers carried posters showing the faces of the fallen: out brothers and sisters either murdered by antigay bigots or driven to suicide by bullies. In the end, all of them were murdered, none of them will ever be forgotten.

At the closing ceremony, a few dozen names were read out, out of a list of more than 1,000 fallen members of our community. Specific demands for the White House, Congress, and the Supreme Court were also made. These were as follows:

Obama to sign an executive order prohibiting gender/transgender/sexual orientation discrimination in hiring by all contractors doing business with the Federal Government.

Congress to pass the various ENDA and other bills to prohibit employment discrimination and to crack down on gender-based bullying.

The Supreme Court to use one of the two marriage cases they are hearing to not only overturn DOMA but make full equality in marriage rights the law in all 50 states.

The overall demand was full equality for Gay, Straight, Trans, Bi, Queer and all other gender and sexual preference expressions, without compromise or exception.