Posted on November 19, 2012 by dcdirectactionnews

On the 18th of November, thousands of protesters opposing contruction of the Keystone XL tar sands pipeline paraded a giant “pipeline” stretching for blocks through the streets, marching from Freedom Plaza to the White House and back.

Video of the march w clips of speakers 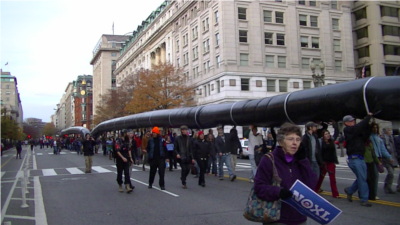 One of the speakers pointed out that over 90% of oil industry experts expected TransCanada to have a permit for the Phase 4 northern leg to cross the border by this time last year and they still do not have it. That is a minimum one year delay even if Obama goes back on the promise he made to pro-Earth voters to block the Keystone XL.

This statement comes while the Lakota are comparing the pipeline to the railroad, as it would be driven right down the center of their remaining lands. The railroad brought death and destruction to Native lands, and now is being invoked in reference to the tar sands pipeline. This comparison esentially calls the Keystone XL an act of war against the Lakota and other Native people, something Transcanada ought to think long and hard about.