Posted on November 15, 2012 by dcdirectactionnews

In the second phase of Code Pink’s Nov 14 day of action, a mock drone was set up outside the Cannon House Office Building and a die in complete with bloody sheets staged symbolizing children and teens killed by US drones.

Video of the die-in protest and drone 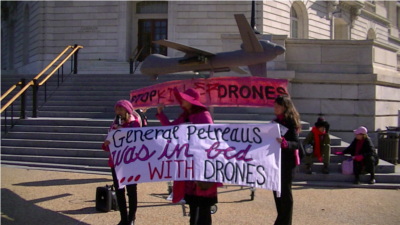 Code Pink members read off the names of US drone victims, then lying on the sidewalk covered with the painted. bloody-looking sheets.

One of the banners stated that is is DRONES that General Petraus is really in bed with, and speakers said that is what he ought to be punished for.

Afterwards. Code Pink went to the offices of Rep Mike Rogers (Chairman House Intelligence Committee) and Dan Wagner, then to the office Buck McKeon, Chairman of the House Armed Services Committee,staffer at both offices said they would pass Code Pink’s messages, but with no commitments.

Back in 2007, Mike Roger’s Michigan office in Lansing, Michigan was trashed by presumed antiwar activists unrelated to Code Pink, after which a local TV station featured his staffers whining about the protest (Audio Report from March 23, 2007 by WSQT Radio). I seriously doubt that he has changed his GOP stripes since 2007, so it will be interesting to see what response, if any Code Pink gets from him.