Posted on December 31, 2011 by dcdirectactionnews

An “Anonymous” contingent (the protesters, not the master hackers) has been marching out of Occupy DC to protest the NDAA military detention clause every night for the past two weeks at the White House. On the 30th of December two participants were arrested for wearing the trademark “Guy Fawkes” face masks.

Video of protest and one of the arrests 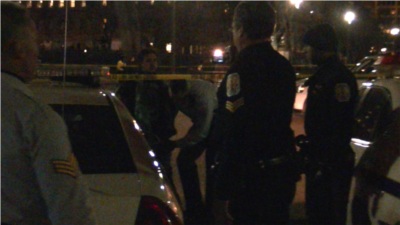 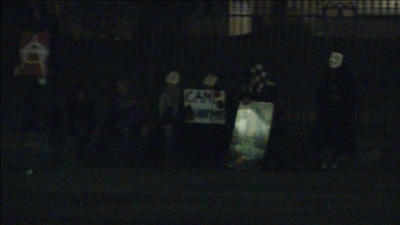 The word we received back at McPherson Square was that the two arrestees would be held until Monday, probably on charges of “piracy!” I can’t vouch for the accuracy of this legal statement, but apparently wearing a mask during an “illegal action” is called “piracy’ in DC.

Protesters in masks staged a civil disobediance style sit-in between the lamp posts in front of the White House, leaving at the second warning, only to stop off the sidewalk, then back onto it in formation, then return to their post. They finally left after a few rounds of this-and cops decided not to let them leacve peacefully, suddenly arresting two for this bullshit “mask piracy.”

Normally piracy means boarding a fat merchant ship full of consumer goods for the wealthy nations off the coast of Somolia and demanding ransom to release the crew and all their consumer trash!

If the new mask law passed because Mary Cheh and Goldman-Sachs were upset with the HLS demos is the law defining wearing a mask as “Piracy,” this is an outrageous law passed by the DC Council. Perhaps if one of them owns a yacht, or just a 4-wheeled land yacht, someone will teach them the true definition of piracy. On the other hand, if the 2011 mask law was NOT used and an obscure old law defining mask waring a “piracy”is being used instead, this marks an outrageous breach of the expected rules of engagement by the Park Police, and could lead in the future to more confrontational relations between protesters and the Park Police.