Posted on March 26, 2011 by dcdirectactionnews

On March 24, Ringling Brothers and Barnum Bailey Circus got a rude surprise at the Verizon Center. Animal rights activists showed up for the second time of the day as the evening show was letting out-with as high powered video projector. 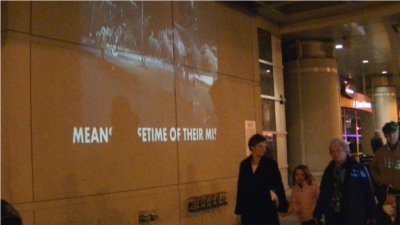 Video of animals ranging from a baby tiger to elephants being abused, beaten, even shot by circus “trainers” was projected onto a wall of the Verizon Center where the circus is “performing.” Captions warned “animal abuse inside this building,” “Don’t buy tickets” and “boycott animal circuses.”

Protesters were divided into the projection element, the vigil element, and a security element on overwatch with three video cameras from three different positions to deter any abuses by security.

Right at the start, security guards approached protesters, claiming it was illegal to project light onto private property without permission. personally intervened against them, warning them that even the FBI had been unable to find any legal way to stop a similar protest against them.
Surely if it is legal to project images of the FBI abusing and killing people onto the side of the Hoover building, it is also legal to project video of the circus abusing and killing animals onto the side of the Verizon Center (a far less sensitive target than the FBI) during the circus.

With this point obvious, security guards backed away and made no further problems for the duration of the protest. Huge crowds then streamed out, and while many walked right by the huge video presentation, others found the footage too compelling to ignore, so they stayed to watch. Even a small percentage of this huge crowd choosing not to return next year would be a serious loss for Ringlings!