Posted on October 24, 2010 by dcdirectactionnews

On the 23ed of October, protesters leaving a SHAC-UK(sentencing) solidarity protest at the Georgetown home of Abbot Fund Vice President John Richardson were threatened by police with arrest for tinted windows in a car, for “incommoding” and for refusing to provide ID. All the threats were shown to be bluffs by the fact that if cops can arrest you, they DO arrest you, they do not bluster and threaten. In particular, there is now law in DC against not carrying ID! 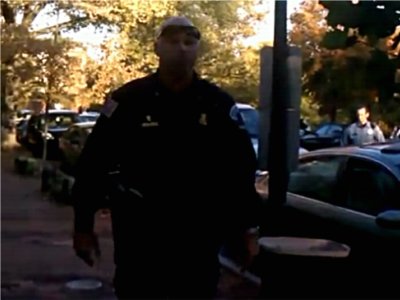 The cops surrounded a parked car before protesters returned to it, ticketed the car for an alleged 13 inches from the curb, threatened to JAIl the driver and impound the car over tinted windows, threatened to arrest the group’s attorney and pushed him away, claimed an attorney could not videotape the proceedings because no charges were being filed, grabbed a camera but returned it on orders from a superior-then let eveyone go. Had they had the legal right to arrest anyone, they would surely have done so after the raucous home demo that had just wrapped up a half-hour earlier. the fact that no arrests were made can be regarded as proof of the lies the cops were telling. At least they were not stupid enough to think they had the ability to “delete” the pictures this time!

A Sgt. Culliver, badge number 722, claimed to be in charge of the police attack. 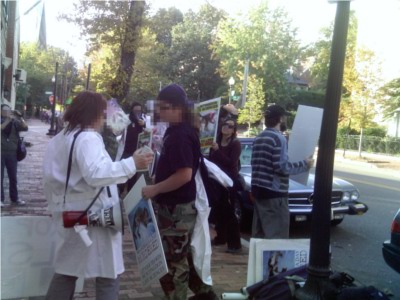 PHOTO:Protesters at the home of John Richardson in Georgetown

Two HLS-related targets received peaceful but very noisy protests that day-Michael Pace of Goldman-Sachs, 1632-B 19th st NW, and John Richardson of Abbot Fund, at 2732 P st NW. There were no problems at Michael Pace’s place, minor neighbor problems at John Richardson’s-and a police attack against protesters afterwards when people returned to their car.

The protests were held in solidarity with the SHAC-UK defendants, six good activists bein sentenced, possibly to long prison terms, in Britain for peaceful, legal protests just like these two. In addition, Michael Pace was warned that for his company, Goldman-Sachs to send 75 Capitol police with guns (via a false report of shots fired) against protesters at the Goldman-Sachs office at 101 Constitution Ave would just send protesters to his home in addition!