Posted on August 22, 2010 by dcdirectactionnews

On the 21st of August,Peter Bass, an attorney for Goldman-Sachs received protests at his home at 3806 Gramercy St in DC over Goldman-Sach’s status as a major stockholder in Fortress Inc. Tom Giles,executive Director of Government Relations for Novartis, received an earlier protest at his home at 3908 Oliver Street in in Chevy Chase, MD prior to the DC Fortress/Goldman Sachs actions.

Huntingdon Life Sciences is a contract animal testing laboratory where undercover investigations have caught “researchers” punching beagle puppies in the face and dissecting live monkeys with no painkillers.

Before visiting Peter Bass, protesters showed up at the home of Tom Giles of Novartis in Chevy Chase. A single Chevy Chase cop responded after a while-and promptly entered the property for a security sweep, checking out what appeared to be a newly-delivered phonebook before checking the property and doors all the way around. He said Tom Giles was away and gave us no trouble. 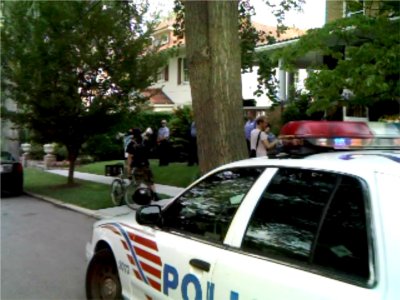 It was at the home of Peter Bass that a very substantial police presence showed up. Seven cop cars to shadow five protesters, and another security sweep of the premises. When protesters left, the entire “train” of cop cars followed the group, at one point driving on the sidewalk to bypass an obstacle!

(about the video: It had to be uploaded to a Youtube channel because Liveleak is in Virginia and Activistvideo.org is having trouble right now. The formatting is incorrect for Youtube’s wide screen display)